Prestonsburg’s Ryan Rose goes up for a shot against Shelby Valley Monday night in the 15th Region All “A” Classic at the Appalachian Wireless Arena. 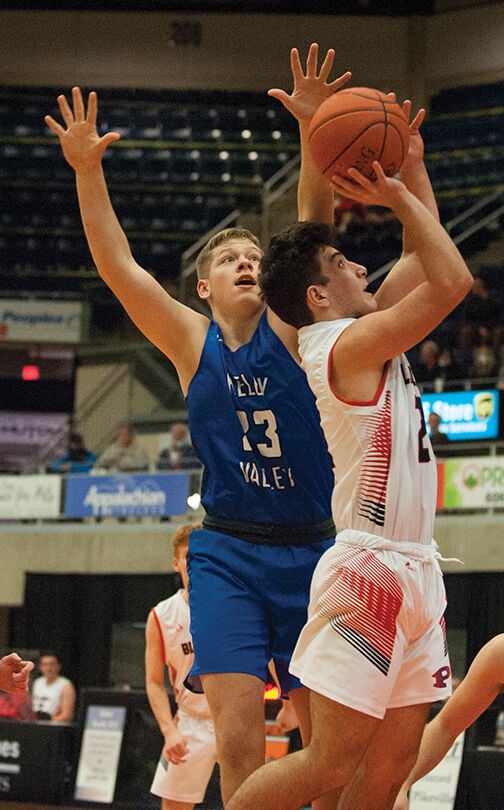 Prestonsburg’s Jon Little goes up for a shot over Shelby Valley’s Caleb Lovins in the 15th Region All “A” Classic at the Appalachian Wireless Arena.

Shelby Valley used its pressure defense to pick up a 67-41 win over Prestonsburg in the opening round of the 15th Region All “A” Classic at the Appalachian Wireless Arena Monday evening.

Prestonsburg had the size advantage and used it to take an early lead over the Wildcats.

Ryan Rose scored eight first quarter points as the Blackcats held an 11-9 lead over Shelby Valley after the first quarter of play.

The second quarter didn’t go as well for the Blackcats, though.

The Wildcats outscored Prestonsburg 28-7 in the second to take a 37-18 halftime lead.

'We still Billieve': Fans turn out at airport to welcome home Bills

Seeking the next Gronk: Jedd Fisch is determined to revive the tight end position at Arizona

Robinson led the way for the Wildcats with a game-high 25 points. He knocked down

Rose led the way for the Blackcats with a team-high 10 points. Will Gullett followed with eight points. Jon Little and Caleb Lawson each scored five points for Prestonsburg. Wes Salisbury added four points. Grant Justice chipped in with three. Kaleb Jarvis, Connor Hopkins and Connor Napier each scored two points for the Blackcats.

Shelby Valley (3-0) will take on Paintsville in the 15th Region All “A” Classic semifinals Wednesday at 6:00 p.m. at the Appalachian Wireless Arena.

Prestonsburg (0-2) is scheduled to host Menifee County Friday at 7:30 p.m.